The metaphor of the Stone Soup 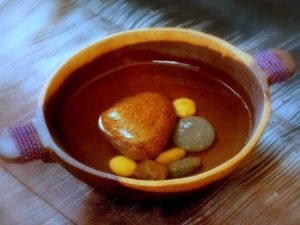 Once upon a time, a soldier was making his lengthy way home after a war. He was on foot, because he had no horse and the stagecoach was too expensive. He didn’t have a penny. Dawn was breaking when, tired and hungry, he reached a little village. The village dwellers had seen him coming from afar, and they stood looking at him suspiciously, as he took his kit bag from his back.

He stretched and smiled. A villager stepped up to him. He was worried, as he thought the soldier wanted food and drink. But the people were also hungry. The war had also come to the village, the harvest was plundered, and they had to share what was left. Still the soldier smiled.

No, he needed no food, but if someone had a pan of water? The farmer remembered that he had an old pot which he used for pig-feed. The soldier could use it, as the pig had gone, and the village pump was in the square. The soldier cleaned the pot thoroughly, filled it with water and set it on a fire of kindling wood. When the water was boiling, he took a spoon and a shiny grey stone from his kit bag, and put the stone in the water. The villagers watched open-mouthed as the soldier told them he was making stone soup.

This stone would make the finest soup that had ever been eaten. He tasted the pot’s contents with the spoon, and nodded appreciatively. If he only had more salt, the soup would be even more delicious. Eventually somebody shuffled forward with a pinch of salt.The soldier added it to the pot, and tasted the soup again: delicious!

But a few bones would make it even better. Again, somebody appeared from the group with a few bones meant for the dog. While he was tasting the soup again, the soldier said that a few potatoes would make it more nourishing, and yet again, someone approached him, this time with a small bowl of potatoes. With a smile on his face, the soldier said how delicious the soup was, but that with some vegetables . . . now the village women came from all sides, one with an onion, another with two leeks, a cabbage, some carrots. A wonderful smell was coming from the pot, when a farmer proudly came up to the soldier with a piece of bacon and a sausage. He had been keeping them for himself, but they would be even better in the soup.

That evening, the whole village ate the magnificent stone soup, and they all went to bed with full stomachs. The next morning, when the soldier was ready to move on, the villagers asked if they could keep the miracle stone. Then they would never be hungry again. The soldier gave them the stone, thanked them for their hospitality, and pressed them to make the soup exactly as he had done. He swung his kit bag onto his back again and walked out of the village to his next destination. Once out of sight, he bent down and picked up a round, grey stone, which he put in his bag, and humming, he went on his way.

Ubuntopia tells cultural stories from emerging markets in a modern magical way. It is a brand striving to have a meaningful impact while inspiring a sense of pride in cultural identities. Ubuntopia is about creating family edutainment and happiness, about sharing cultural stories and undergoing overwhelming experiences together. Ubuntopia connects people of all ages.... END_OF_DOCUMENT_TOKEN_TO_BE_REPLACED

GreenDreamAcademy is the sophisticated Brand Academy for the Brand Ubuntopia®: She aims to give a quality boost to tourism in Africa by developing onsite vocational training business in a divesified working field; She provides vocational training for employees and contractors of both Brands and by doing so contribute to sustainable... END_OF_DOCUMENT_TOKEN_TO_BE_REPLACED