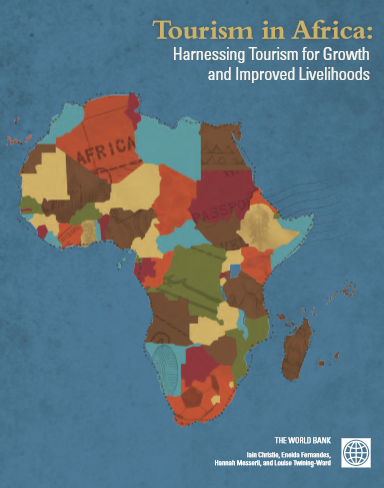 A previously launched World Bank report says that African countries can compete with other tourist-rich regions of the world if they can effectively plan for and integrate tourism into their economies.

The report calls on African governments and the private sector to work together to address obstacles such as land access and visa regulation to expand tourism opportunities, transform business climates and energize job creation, especially for women and youth.

Africa’s mountains, savannahs and rivers, and cultural events such as music, dance and festivals are far above the natural assets found in other regions,” says Iain Christie, one of the report’s co-authors. “With these natural attributes, tourism can play an enormous role in development. But to do so it must be integrated into each country’s economy and government structure and be seen as a benefit by everyone, from the president, to the ministers to the general population.”

“Tourism in Africa” is the first World Bank report to comprehensively examine tourism throughout Sub Saharan Africa (SSA) and to recommend practical, evidence-based measures to unleash the sector’s economic and development power across the continent. It also shows that many SSA countries are on the verge of tourism success.

Tourism is one of the largest and fastest growing sectors of the world economy, and tourism in Africa is ripe for development, the report notes.

For example, the number of tourists arriving in SSA has grown over 300% since 1990, with 2012 marking a high of 33.8 million tourists who visited the region. Income generated from tourism has also climbed: Receipts from hotels, tours and other attractions in 2012 amounted to over US$36 billion and directly contributed just over 2.8% to the region’s GDP, according to the report.

This boost in tourism is occurring just as economic growth is exploding across the African continent. Over the last five years, real GDP rose an average 4.9% – faster than the 3% global average. As a result of the recent economic good health in SSA countries, global hotel chains are poised to spend hundreds of millions of dollars in Africa over the coming years to meet rising demand from both international tourists and the continent’s own fast-growing middle class, the report notes.

“Africa is an important emerging growth market and despite political uncertainty in parts of the region, we continue to see demand for growth of all of our brands throughout the continent,” says Hassan Ahdab, Starwood Hotels & Resorts Vice-President and Regional Director of Operations for Africa & Indian Ocean region. “Starwood will increase its African portfolio by nearly 30% with 12 new hotels set to open over the next three years, adding nearly 3,000 guest rooms to the continent and creating thousands of local employment opportunities.”

At the same time, the expansion of tourism in SSA faces a number of obstacles. Issues such as land ownership and availability, and how land rights are transferred, are central to business and tourism development. Other constraints such as access to finance for investors, taxes on tourism investments, low levels of tourism skills among Africa’s population, lack of security, safety and high crime,  and bureaucratic processes are present in varying degrees in SSA countries. The report provides steps to overcome each of these obstacles.

Creating a path for growth

To understand better which SSA destinations are the highest performers and why, the report presents a typology of destinations, which ranks the 48 SSA countries by level of tourism development, ranging from pre-emergent (those countries recovering from or engaged in civil war) to consolidating (countries with relatively mature tourism sectors), and provides recommendations appropriate for countries at each stage of tourism development.

The report shows how countries that are scaling-up tourism need to invest in promotion and marketing, should take steps to enhance their image, and should provide incentives to investors, while those counties working to deepen their success need to diversify their tourism offerings, address seasonality, and manage growth strategically.

The report presents 24 tourism case studies from a wide range of destinations, dating from the mid-1970s to the mid-2000s, each chosen to illustrate a particular challenge or success and the effects of certain planning decisions. The cases illustrate good practice and lessons learned from countries that promoted tourism as a source of growth and poverty alleviation.

The report describes SSA’s many tourism successes and urges governments to form alliances with the private sector—and the private sector to partner with government at local, regional and national levels. Together they can plan and develop tourism infrastructure, increase transparency in land ownership and create a business-friendly environment for tour operators and other companies. When sustainably managed, tourism fuels economic transformation, accelerates reform, triggers infrastructure improvements, and empowers women and minorities in countries throughout Africa.

This is an editorial piece of a World Bank report.

April 2021 Ubuntu Impact Investments moved to a historic office in the center of Tiel, Ambtmanstraat 9 4001MC, The Netherlands. During the development phase of this historic building into 5 residential apartments, carried out by GreenDreamCompany, we temporarily keep office here. END_OF_DOCUMENT_TOKEN_TO_BE_REPLACED

Focus on jobs, gender, fragility, climate, and good governance STOCKHOLM, December 13, 2019 — A global coalition of development partners announced today their commitment to maintain momentum in the fight against extreme poverty, with $82 billion for the International Development Association (IDA), the World Bank’s fund for the poorest. The financing,... END_OF_DOCUMENT_TOKEN_TO_BE_REPLACED

With dignity and pride our corporate foundation  received the Global NGO Leadership & Excellence award. With Community Building as part of her core values and as incubator of innovative ideas, GreenDreamFoundation develops tourism labs that may grow into independently operating organisations. Community building, managing diversity, welfare and community development in... END_OF_DOCUMENT_TOKEN_TO_BE_REPLACED

Sustainable tourism is a green growth opportunity for Southern and Eastern Africa. To safeguard nature as a resource for this sector, governments need to ensure that low-income communities are included in the conservation of wildlife and landscapes essential to the tourism product. To do this, governments need to support enterprises... END_OF_DOCUMENT_TOKEN_TO_BE_REPLACED